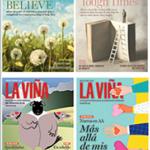 Purpose: The Grapevine is and has been the Fellowships International meeting in print since 1944. The purpose of the Mid-Southern California Grapevine/La Vina Committee is to:

AA Grapevine Reps (GvRs): The basic job of the Grapevine representative, or GvR, is to make the magazine available to the home group, and to encourage AAs to read it, subscribe to it, and use it in Twelfth Step work.The GvR may volunteer for the service position or be elected. Most GvRs have found that simply bringing the Grapevine to the attention of their group on a regular basis raises awareness about the magazine and eventually expands its readership. GvRs who read and enjoy the magazine themselves are likely to communicate their enthusiasm to others.

GvRs at group, district and area levels are a vital part of The Grapevine helping us to continue carrying the message of AA. What started out in 1944 as an eight paged newsletter grew into a full magazine that not only served as Bill W.’s communication tool to the growing number of AAs but has now reached a monthly circulation of approximately 115,000.

Copyright (c) by the AA Grapevine, Inc.; reprinted with permission..