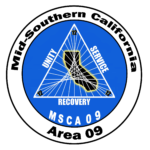 This site is maintained by the Mid-Southern California Area Assembly of Alcoholics Anonymous Area 09 for the purpose of dispersing information pertinent to service work within the area to the GSR’s, committee members, officers and other interested alcoholics.

Purpose of the MSCA

Service to the Fellowship of Alcoholics Anonymous shall be the primary purpose of General Service in the Mid-Southern California Area.

A Delegate Area Is a geographical division within a state or province. There are 93 areas in the U.S. and Canada. One conference delegate comes from each area. In California there are six (6) Delegate Areas.

An M.S.C.A. committee that is made up of Area Officers, past Delegates, D.C.M.C.’s, alternate D.C.M.C.’s, D.C.M.’s, other District Officer’s, Standing and Coordinate Committee Chairs and Co-Chairs. There is a minimum of two A.S.C. Meetings between each regular Assembly.The Area Service Committee has the following purpose:

The Assembly is the mainspring of the Conference structure and is the representative voice of the movement expressing itself. It is the gathering of the G.S.R.’s and the A.S.C., which deliberates upon and enacts resolutions concerning service matters brought before it. Its responsibilities include: